Send us an enquiry and we will reply you shortly. 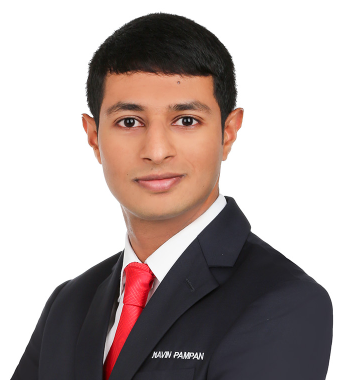 Navin Pampan was conferred as the top graduate of RMIT University in 2017 having graduated from the Business Faculty with distinctions in double majors and being awarded the prestigious IBM Top Student award. Immediately after, he decided to pursue his passion in the Real Estate industry. Fuelled by his desire to excel, he managed to pass the notoriously known Real Estate examinations in his first attempt. Within the first year in the business, he managed to clinch the Top Achiever awards multiple times in consecutive months.

Navin's speciality lies in the luxury real estate segment where he has brokered multiple deals in some of Singapore's most expensive and luxurious developments - including record transactions; representing buyers, sellers, landlords and tenants as well. He is very well versed with the latest policies and tax structures – being able to advise both local and foreign investors in great detail regarding the macro economical landscape.

Navin’s attention to detail and intricacy in financial analysis also allows him to advice clients with sound investment strategies to efficiently enhance their asset portfolio. This has enabled him to produce great results for his clients and is a testament and justification of his 5 Stars rating on the official ERA Platform – Singapore’s most established international real estate brokerage firm. Being a tough negotiator, he has recorded several record priced deal for his clients. He is also honoured to count some of the who's who of the business world as his clients; of whom some are billionaires, VIPs and CEO’s of the world's top MNC's and financial institutions.

Navin is also one of ERA’s Million Dollar Club Achiever in 2019, and in 2020 he was featured by ERA in Singapore's national newspaper The Straits Times - as one of the company's Top Achievers. In 2021, Navin was an ERA Asia Pacific Elite Award Winner and was also granted membership to the exclusive club PLUSH By ERA - specializing in luxury real estate. In that same year, Navin achieved his best ranking of position number #3 out of 8120 agents in ERA, and was one of the youngest recipients in the company’s history of the prestigious Red Diamond award - bestowed only upon realtors who cross over half a million dollars of commission in a single month. He was also the company’s number #1 top achiever for developer’s sales in the core central region of Singapore - where the most lucrative real estate lies.

Please fill in the form, we will get back to you as soon as possible